Robert is an acclaimed television and theatre director, writer and specialist in digital capture and Screen Arts.

In April 2021 he joined Fremantle as Creative Producer, Global Drama whilst maintaining a creative relationship with Storyglass as Consultant Producer.

In January 2021, he announced The Vertical Theatre (www.theverticaltheatre.com), a collaboration with Ric Lipson, Stufish Entertainment, Holly Gilliam (www.hdgprojects.com), Katy Lipson of Aria Entertainment and Jake Berry. The new company is working on a new era of performance venues as a response to the global pandemic of 2019/2020.

In late 2020 he commissioned and Executive Produced the podcast series What I Love (STORYGLASS/TAKE COURAGE/FREMANTLE) with host Ian Rickson and featuring Jessie Buckley, Sonia Friedman, Chiwetel Ejiofor, Kae Tempest, Cush Jumbo, Ben Whishaw and Russell Brand and the newly announced That Podcast (STORYGLASS/ETT/FREMANTLE) with contributors including Ella Hickson, Nish Kumar and numerous others and the global fiction hit The Harrowing, Mark Healy’s supernatural crime series, starring Joanne Froggatt, Rege-Jean Page and Sorcha Groundsell.  In 2020 Storyglass became part of the Bertelsmann Group. Fremantle, Penguin Random House UK, BMG and DK announced the joint podcast business as part of Bertelsmann Content Alliance UK. Storyglass will operate as a standalone Bertelsmann company and will focus on developing and producing podcasts of all genres, complementing the output of each of the businesses across TV, media, books and music in a UK Audio Alliance.

In spring 2019, he directed Bleak House Guest for Sky Arts Urban Myth series, starring Monica Dolan, Ian Hart and Stephen Mangan. He co-wrote and directed all six episodes of Channel 4's critically acclaimed Hang Ups (Slam Films) which aired Autumn/Winter 2018 and is now available on All4, iTunes, Netflix, Amazon and Hulu. The series was nominated as Best International Comedy Drama at the 2018 C21 Awards and for the Comedy Award at the South Bank Show Awards 2019. He is currently under commission from UKTV on Falling Up with fellow writers, Georgia Pritchett (Veep, Succession, The Thick Of It) and Stephen Mangan (Hang Ups).

In late 2018 he was appointed as Creative Director of Fremantle’s fiction podcasting label - STORYGLASS, launching the label in December 2018 with the first commissioned projects, Regina Moriarty’s Baby It's Cold Outside starring Chris O’Dowd and Ann-Marie Duff and the critically acclaimed Kill The Beast’s Who Exploded Vivien Stone? New projects announced in May 2019 include Max&Ivan: Fugitives, a geo-political comedy about the threat to democracy from technology, now widely available and starring Gemma Whelan, Stephen Mangan, Alice Lowe, Adam Buxton and Kyle Kinane; AKB 2080: The Akebu-Lan Chronicles - a multi-part African-Futuristic Anthology Series in conjunction with ten10 FILMS and Cinebar Studios and Jeanie O’Hare’s feminist historical epic, The Wolf Of Paris.

In 2009, he founded the multi-award-winning Digital Theatre and Digital Theatre Plus, respectively the world’s leading performing arts and arts education platforms, with a footprint in more than 100 countries and accessible by over 4 million students worldwide. Most recently, Digital Theatre’s live streamed production of #15Heroines, a collaboration with Jermyn Street Theatre was #3 in the top shows of 2020 by The Guardian/Observer.

He has directed all 25 of Digital Theatre’s live captures of theatre, dance and opera productions, including the Sonia Friedman Productions/Menier Chocolate Factory Production of Funny Girl, starring Sheridan Smith (UK cinemas Autumn 2018 through Trafalgar Releasing), which was subsequently broadcast on Sky Arts over Christmas 2018, Northern Ballet's Casanova (Sky Arts) which was broadcast on Sky over Easter 2018 and ETT’s acclaimed revisioning of Othello, which was released in January 2019 on digitaltheatreplus.com.

In 2011, he collaborated with Routledge’s publisher, Talia Rodgers, to conceive and build The Routledge Performance Archive (www.routledegperformancearchive.com), an "unparalleled archive" of online performing arts material, which also serves academics, institutions and students worldwide.

His capture director work for global cinema and Digital Theatre’s online platforms include the Almeida's Ghosts starring Lesley Manville, The Old Vic's The Crucible starring Richard Armitage, Sherman Theatre's Iphigenia In Splott, Stephen Sondheim's Merrily We Roll Along, David Tennant and Catherine Tate in SFP's Much Ado About Nothing and numerous others involving many of Britain's leading theatres and producers including Frantic Assembly’s Things I know To Be True, True West, Beautiful Thing, The Comedy Of Errors, Private Lives, King Lear, Billy the Kid, Long Days Journey Into Night, Macbeth, All My Sons, Kafka's Monkey, Over There, As You LIke it, A Doll's House, The Container, Far From The Madding Crowd, etc. Other projects include the GULF STAGE project in Doha, Qatar, a collaboration between the British Council and Digital Theatre and the national theatres of the Gulf States.

He continues to work as Creative Advisor for the Digital Theatre Group alongside fellow advisors, Dawn Airey, Kate Packenham and Ed Vaizey.

Robert has also directed over forty stage productions in theatres such as The Donmar, Royal Court, Almeida, Hampstead Theatre, RSC, The Royal Exchange Manchester, Liverpool Everyman, Sheffield Crucible Theatres and the West End, including Dario Fo's Accidental Death of an Anarchist (Donmar Warehouse), Stephen Adley Guirgis' In Arabia We'd All Be Kings (Hampstead Theatre), Gary Mitchell's In A Little World Of Our Own (Donmar Warehouse), Peter Whelan's A Russian In The Woods (RSC/Barbican), Gary Mitchell's The Force Of Change (Royal Court) and Owen McCafferty's Shoot The Crow (Trafalgar Studios/West End).

Robert has worked extensively as a creative consultant on arts and culture projects. He was formerly Creative Director of Amnesty International where he oversaw all their media output and cultural events including the 60th UNDHR anniversary project, where 30 of the world's leading writers were commissioned to produce short stories based on the articles of the Universal Declaration of Human Rights, subsequently published under the title Freedom.

He is a Chair of English Touring Theatre, appointing Richard Twyman and Sophie Skull to lead its creative renewal.

In 2016, Robert was selected as one of the 50 creative leaders in the UK. The Creative Leaders 50 is an annual scheme from Creative Review, in partnership with Workfront, to celebrate, educate and inspire those who are leading creative businesses, organisations and teams. In 2016 they selected 50 people from across the UK creative industries who we feel are driving change, not just within their organisation but in the world at large. 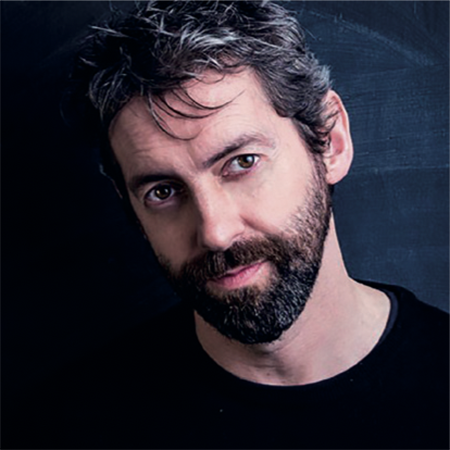